During the conquest of Istanbul, by the order of Fatih Sultan Mehmet was built in 90 days in order to cut the aid from the Black Sea to the Byzantine Empire.

The Rumeli fortress, which is a magnificent structure with its three big towers and city walls, is located opposite the Anadolu fortress at the point where the two shores of the Bosphorus are at the very closest point.

The fortress, where once outdoor activities such as Rumeli fortress concerts took place, is now open to visitors as a museum. In the Rumeli Fortress Museum, the cannons, cannonballs and part of the chain, which is said to have closed the Golden Horn, are still on display.

Rumeli Fortress is an indispensable stop for photo enthusiasts. Is the most beautiful place to take Panoramic pictures of the Istanbul Bosphorus.

The mystery of Rumeli Fortress

When look at Rumeli Fortress with bird's eye the shape of fortress is like word Muhammad in Arabic. The reason why Fatih Sultan Mehmet has made the fortress in this shape because He predicted that Istanbul could not only be protected by military force. It is rumored that he had done this way because a spiritual support was needed. 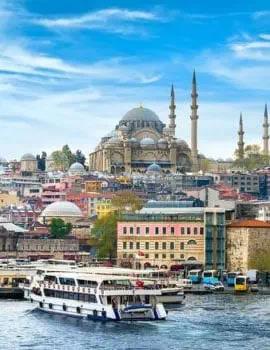 Ephesus, Turkey Selcuk district of Izmir on the Aegean coast in the ancient city of Ephesus Roman, Greek and contains the breeze of different civilizations.